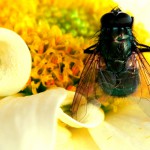 Question: We cannot control many things that destroy other life forms simply by being alive. For instance even our bodies are a battleground of anti-bodies and viruses and bacteria. Such life is very low in consciousness, but it is life none the less.

A friend of mine has a rodent problem and his landlord has been sending exterminators to his house to kill them. Should we be concerned about our karma?  I tend to be less concerned with things beyond my control and often try to rationalize the fact that whatever end meets an insect or rodent is simply a product of that entities prior Samskaras. I can only do my best not to be the instrument of that. And if I unconsciously act in a way that leads to the demise of another creature, such as the Automobile example, it is the will of the Lord that I am that instrument.

Answer: We should be as non-violent as possible. But some violence is unavoidable, as you gave the example of insects getting killed while driving. We do get karma for that also but it is very minimal in comparison to say killing a cow for meat.

First of all insects have very little consciousness, secondly we do not intend to kill them. It happens.

Yes killing rodents will bring karma and if it can be avoided it is better. Or get a cat who will eat them and that will not bring karma to us because rodents are natural food for cats.

In old Vedic culture it was prescribed for householders to do five types of Yajna to counteract the karma coming from unavoidable, unintended violence.

On the path of bhakti we do not have to do that, but we should also not kill unnecessarily.

If rodents are eating crop then it may be unavoidable to kill them, otherwise nothing will be left. Since we offer everything to Krishna that will take care of the karma.