Is Bhakti Dependent on Indian Culture?

QUESTION: Why can I not be a devotee of Kṛṣṇa without subscribing to Vedic or rather Indian customs? Why do I have to dress like an Indian, which even modern Indians don’t do? This may be alright while one is living in India, but to carry these customs to the West makes one look weird …

QUESTION: Why can I not be a devotee of Kṛṣṇa without subscribing to Vedic or rather Indian customs? Why do I have to dress like an Indian, which even modern Indians don’t do? This may be alright while one is living in India, but to carry these customs to the West makes one look weird and an object of mockery. Bhakti, after all is not dependent on anything external, it is a matter of bhāva. Kṛṣṇa is pleased only with devotion and not with anything else: bhaktyā tuṣyati kevalaṁ na tu guṇaih bhakti priyo mādhava (Padyāvali 8).

ANSWER: Absolute reality has two manifestions, personal and impersonal. The yogīs and jñānīs strive for impersonal realization of the Absolute after attaining perfection in the form of ultimate liberation, ātyantika mukti, they do not have any personal relationship with the Absolute. Therefore, they do not need to follow any specific culture in which they will live after liberation. Devotees, however, follow the path of a personal God.

On the path of devotion, there are two types of devotees. Those who want to have a specific relation with Him in a specific form and those who are not keen on any specific relationship. Those who want to have a specific relation have to know the specific form of God, such as Kṛṣṇa, and His mood and behavior befitting the desired relation. This had to be understood here in the sādhaka body. On the path of a specific relation (ragānuga), the service is done both with one’s physical body and also the aspired spiritual body (sevā sādhaka-rūpeṇa siddha-rūpeṇa cātra hi, Bhakti-rasāmṛta-sindhu 1.2.295). To do this sevā, one has to learn the customs. As far as doing the sevā in the spiritual form, there is no social restriction because it is all done as a meditation, but to do the sevā with the physical body, there may be social restrictions, because one may not live in a society or family that is supportive of devotion. Then one has to make adjustments, but one has to always keep in mind the goal.

As Gauḍīya Vaiṣṇavas, our goal is to be with Kṛṣṇa, therefore it is important for us to understand Him as a person within a certain setting. How much of the rules and customs we can follow can be adjusted if one understands the principles. If one does not understand the principles, then the tendency will be to do what one is accustomed and then gradually one may just follow one’s own mind and not the principles of bhakti. Here it should also be understood that on the path of bhakti, what is most important is bhāva, but that is not something we have, rather it is our goal or object to achieve. And although the customs and process of Deity worship, rules related with eating, greeting, and worship are external to bhāva, they also assist to reach this bhāva.

Thus, unless it is impossible or unfavorable to practice these principles and customs, one should try to follow as much as one can. Moreover, if one has bhāva, which means love, one would naturally do what is pleasing to Kṛṣṇa. Why would one like to do something which is not appreciated by Him?

Krishna is not Indian nor does He follow modern Indian culture. But He is also not Western. He lives according to Vedic culture and customs. If we want to live with Him, then we need to know this culture and follow it as much as possible in our modern setting. If we cannot follow it because of our social situation, we should at least be aware of it, be respectful to it, and not deride it. Those modern Indians who do not follow Vedic culture are not our ideals.

QUESTION: But how can God be so narrow-minded and why would He be partial? God is universal and does not discriminate, so why do I have to follow something which is only known in India and not follow the Western customs and attain God?

ANSWER: Yes, I agree that God is universal and impartial and it is possible to approach God by following any culture or customs. However, as said before, we are not interested in that impartial manifestation of God.

Our goal is to have a specific loving relationship with a specific form of God called Kṛṣṇa who is svayaṁ bhagavān and who is not impartial when it comes to His devotees.
God has two kinds of manifestation—very specific manifestations such as Kṛṣṇa or Rāma, and a general impartial manifestation, called Paramatma, or Isvara. Besides this, He also has an impersonal manifestation, called Brahman. So if one is interested in attaining Brahman, or just Paramatma, then one does not have to follow the specific Vedic custom, culture or life style, because in that there is no need to develop a specific relationship with God. However, if the interest is to be with Kṛṣṇa in Vraja and to have an intimate relation, then one has to know Him very intimately and make oneself qualified to live with Him in the desire intimate relationship. 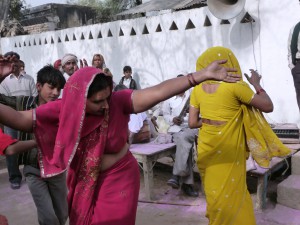 Kṛṣṇa has His partiality for His devotees, His likes and dislikes. He identifies Himself as a cowherd boy and nothing else. He does not identify Himself as a creator god or one who looks after the maintenance of the cosmos. His mind is very much focused on His devotees in Vraja. He does not think of anything beyond. An example of His mood is when the wives of the brāhmaṇas of Mathura approached Him with food and surrendered to Him, he did not accept them in the same way as the cowherd girls and women because according to Vedic or traditional Indian culture, a cowherd man cannot have any conjugal relation with a brāhmaṇa girl or woman. For this reason, Gauḍīya Vaiṣṇavas, who want to have a mādhurya bhāva relationship with Kṛṣṇa, aspire to be born as cowherd-girls and not brāhmaṇa girls. So, Kṛṣṇa in Vraja has the ego of a cowherd boy. Outside of Vraja and in other forms, He has other egos. This has to be properly understood.

Thus, these things are just a matter of custom. Kṛṣṇa behaves according to the ideals of Vedic culture, and therefore we have to learn these if we are interested in a relationship with Him.

One should keep in mind that this is a very specific path and one has to be very clear about one’s goal. And that practice has to be done here. There is no bypassing it.