Home  |  Inauguration of the Bhakti Tirtha Course at Jiva

Inauguration of the Bhakti Tirtha Course at Jiva

The room was full of excitement as Babaji’s 40 students for his Bhakti Tirtha course eagerly awaited his appearance. Even Babaji’s two brothers, Rishipal ji and Dr. Chauhan made the two-hour drive from Faridabad for this special occasion.

The room was full of excitement as Babaji’s 40 students for his Bhakti Tirtha course eagerly awaited his appearance. Even Babaji’s two brothers, Rishipal ji and Dr. Chauhan made the two-hour drive from Faridabad for this special occasion. It was inspiring to see so many familiar faces of Babaji’s students from around the world – Rama Krishna  and Bharata from the USA, Kubara from Poland, Ladili from France, Sujani and Manu from Switzerland, Purushottama Prabhu from India, Shailesha from Lithuania, and many others. 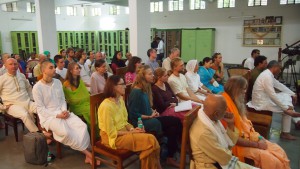 Despite the wide range of countries there was one thing everyone shared in common – the smile lighting up their face when Babaji and his fellow teachers and Vaishnava scholars entered the room and graced the stage. 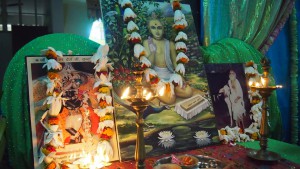 After a special puja for Jiva Gosvami, each teacher took a turn explaining about their specialization at this Bhakti Tirtha course inauguration. In addition, His Holiness Srivatsa Goswami of Radha Raman temple, Dr. Acyutalal Bhatta, Ananda Gopal Maharaja (Sankrit Teacher of Jiva Institute from Radha Kunda), Dr. Demian Martin, Padmanabha Babaji of Jiva Institute blessed Babaji’s efforts and spoke about the importance of this attempt to lay a systematical foundation for Vaishnava studies with this Bhakti Tirtha 2016, which very appropriately happens to be the millennium of Ramanujacarya’s appearance. The honorary guests spoke in English, Hindi and even Sanskrit. Here are a few snippets from the English talks: 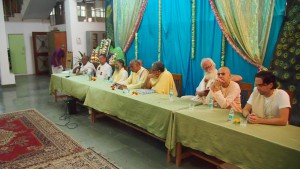 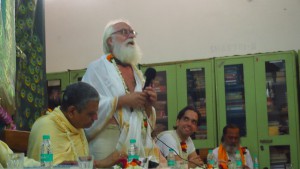 “The purpose of Babaji’s Jiva Institute was to give Jiva Gosvami his rightful place in the sampradaya. Through Babaji’s vision, determination, unflinching desire, and devotion to his guru, we see now after 20 years it is becoming a reality. This is a feast of knowledge that Jiva Gosvami has set up. We are trying to enter his thought pattern for which knowledge of Sanskrit is essential. He has left the remnants for us to participate in this knowledge at the Jiva Institute. We need kavya rasa and siddhanta rasa – if we get them both, we have two wings to fly.”  – Jagadananda Das, Sandarbha editor and teacher of Gopala Champu

“Modern education gives you material knowledge, so you can get a job and make money. Vedic education is completely different. It gives you something you will not get from a material education, and that is spiritual knowledge. Because the root cause of suffering is ignorance and ignorance can only be overcome by education – by learning the sastra. The greatest authority on the Sandarbhas is Dr. Satyanarayana Das.”  – Dr. Demian Martins, Vaishnava researcher, author and scholar.

“To understand philosophy, one needs to understand Nyaya, which is based on critical thinking refined to its deepest, sharpest edge. Even bhaktas who want prema need critical thinking. It is necessary so that we can see clearly and don’t fool ourselves.”  – Dr. Matthew Dasti, professor and teacher of Nyaya. 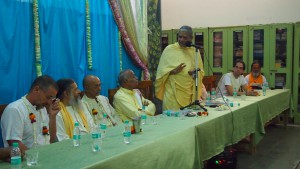 “Lord Chaitanya rediscovered the holy dhama. He wanted to have an institutionalized seminary of bhakti. Vrindavan is the dance arena of bhakti, so it is the most appropriate place to learn about bhakti here.  The Six Gosvamis only built three temples because they knew that the monuments will not last. These original temples are no more now, but the shastras are. They are the only pillar that goes on beyond space and time. The shastras are living. The Gosvamis focused on creating a complete knowledge system of bhakti.” – HH Srivatsa Goswami

Despite all of the guests of honor praising him, even those senior to him, Babaji wrapped up the inauguration by humbly stating, “My Gurudeva is the force behind it and I am only an instrument. I don’t consider myself a scholar. I am just a student. Maharajji used to say that our acaryas have written so many books, but people don’t study. So much attention is given to bhajan, but our shastras are meant to be studied, not put into samadhi. I wanted to study the Sandarbhas  for this reason. 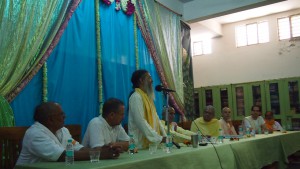 I came to Vrindavan, the place where the Sandarbhas were written and taught for the first time. I approached all the great scholars of repute in Vrindavan and asked if they could teach the Sandarbhas. I got only answer from all of them – that the only person who could teach me was Maharajji. I studied from him every day. During the course of teaching he also inspired me to preserve and propagate the teachings of Sri Jiva Gosvami. It is by his inspiration and guidance that Jiva Institute was formed. It was my desire to bring to light the teachings of the Gosvamis and have a place where scriptures can be studied. I want to revive our acarya’s system of education. I am glad that it is happening now. According to me Sri Jiva Gosvami is the brightest star in the galaxy of Vedic scholars and my wish is that you all study his writings. This is the only purpose of human life.” 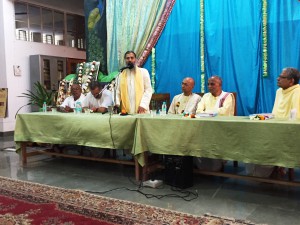