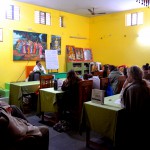 For the last five year, undergraduate students from the Department of Religion of Rutgers University, State University of New Jersey, USA, have been visiting Jiva Institute Vrindavan during their Christmas break for three weeks to participate in an official 3-credit introductory course on Hinduism. The students spend three hours each morning covering the academic component of the course, which primarily consists of a historical study of the philosophical and religious traditions of India, with a particular focus on the devotional traditions that typify Hinduism.

Besides that, they also get guided tours to the temples and holy places of the region. Cultural programs, such as devotional music, dance, or kṛṣṇa līla are arranged for them to have an experience of the local culture. They also visit a village in the Vraja area to get an experience of Indian rural life, and they participate in kīrtan.

To be recognized as an academic partner by a very reputed university of the USA is a unique achievement, not only for Jiva Institute and its Founder and Director, Babaji Satyanarayana Dasa, but also for the whole Vaishnava community at large.

The Hinduism course, conducted by Babaji, commenced today. Fifteen enrolled students, a few guests, and close friends have arrived at the Institute for this purpose. Babaji welcomed everyone with a maṅgalācaraṇa, an auspicious invocation. He then introduced himself and briefly spoke about his educational and professional background, and his transition into ancient Indian philosophy and religion, spirituality, and Sanskrit. He then expressed his reverence towards the great teachers, who blessed him with transcendental knowledge, unto whom he is eternally indebted.

Babaji said that there are different views about Hinduism according to “outsiders” and “insiders”. He said that he will speak on both. To give an outsider’s view, he played a video of Prof. Griffin from Oxford University. Prof. Griffin said that the word “Hinduism” is a misnomer given by the Muslims to those who lived on the banks of the river Sindhu or Indus, which flows through modern day Pakistan. He critiqued the commonly accepted definitions of Hinduism among academic scholars and concluded that the enormous breadth and depth of Hinduism evades being fitted into a simplistic definition. He remarked that one of the unique characteristics of Hinduism is the ability of its adherents to tolerate diversity.

Babaji then began explaining in insider’s view. He said that the word “Hinduism” is a modern term for sanātana-dharma, or eternal principles of life, that have their roots in the Veda. He introduced the original scripture of the Hindus, the Veda, as being an emanation from God. God’s creation of the world and the Vedas is analogous to the creation of a machine and its accompanying user-manual. Babaji further said that sanātana-dharma does not comprise a religion disconnected from the variegated socio-political activities integral to human existence, but rather is a highly sophisticated and cultured lifestyle harmonious with nature, in which religion is inseparably intertwined with every minute aspect of every human’s daily chores.

In explaining the Veda, its various divisions and subdivisions and accompanying ancillary texts, Babaji maintained that the sole purpose of the intimidatingly voluminous texts was only to gradually raise the consciousness of humans to the highest stage of spiritual perfection, and that in pursuance of this eventual goal, all apparently contradictory statements are unambiguously and beautifully reconciled.

Babaji then described the foundational concepts of sanātana-dharma such as dharma, karma, and yajña. He said that although the word dharma is commonly translated as “religion”, the term “duty” would be more accurate. He said that karma is the irrevocable cosmic law of divine justice by which the law-abiders are elevated while the law-breakers are rectified in order to maintain the natural balance in the universal creation. Yajña is essential to invoke benedictions and also repay our numerous obligatory debts to nature.

He then spoke briefly on the four goals of human life — dharma, artha, kāma, mokṣa, and the four universal social orders of human classification — brāhmaṇa, kṣatriya, vaiśya, śūdra, based on every individual’s acquired qualities and activities initiated by his own will. Addressing the misconceptions and heated disputes among contemporary Hindus and academic scholars, he emphasized that scriptural injunctions must always be understood and practiced according to one’s adhikāra, or qualification, under the authoritative guidance of a guru, without which all efforts would be futile. 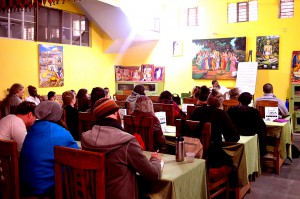