Free Will or Forced to Act?

Answer: You say, “Depending on how deep our knowledge saṁskāra is, we have the capacity for control.” This is not true. Having knowledge and the capacity to control are two independent factors. For example, there are millions of people who know that smoking is not good. They know about the bad effects of it on one’s health and yet they continue to smoke. Because of these two factors being independent of each other, Arjuna asked Kṛṣṇa anicchann api vārṣṇeya balād iva niyojitaḥ (Gītā 3.36). There are two parts to it: anicchann api—not desiring but being forced to do it, and, not being able to control. This means a person does not desire to act, but has no control and is therefore forced to act.

Our capacity to make the right decision therefore depends on two factors—proper knowledge about the subject and the ability to control our mind and senses. When one is very much driven by passion, rajo guṇa, then control is not easy. This is Kṛṣṇa’s verdict:

“It is desire, which turns to wrath, born from the guṇa of passion. This desire is insatiable and most sinful. Know it to be the enemy.“ (Gītā 3.37)

Really speaking, there is no true free will; our will is always conditioned or colored unless we are a jīva-mukta. Our previous saṁskāras, habits or proclivities, are always influencing our thought processes. Therefore, they condition our decision-making faculty. Thus it is never absolutely free. Even this conditioned freedom varies from person to person, depending on how much they are influenced by the guṇas of prakṛti. When one is very much under the influence of rajas and tamas, then one’s freedom becomes very limited. One is forced to act, although one has knowledge. This is what Arjuna means when he says, balād iva niyojitaḥ.

Question: People commit offenses because they are forced to. They are unable to advance, even though it is not their fault.

Answer: If it is not their fault, whose fault is it? When one has knowledge and does not have enough power to control one’s senses, then one is forced to act. Yet, even in such a situation, one can make an effort to come out of this situation. There are two possibilities:

The first is that when one is forced to act in a forbidden manner, one can mentally surrender to the situation and go along with the flow and enjoy the forbidden act. This will make one’s mind weaker and more conditioned. For example, supposed I have a tendency to enjoy drinking liquor and whenever I get the urge, I drink and then think that I cannot do anything about it. I am a slave of my habit. Then I will never come out of it and I never can come out of it because I have surrendered to my habit.

The second option is that although I am weak and am forced to act in a forbidden manner, mentally I do not approve of it. I remain aware that what I am doing is wrong although I cannot stop it and I pray to Kṛṣṇa to give me strength so that I may overcome it. I maintain my awareness that this act, although appearing to be pleasurable, will ultimately be the cause of my suffering. Kṛṣṇa has described this phenomenon in the following verses:

“Even if a very ill-behaved person worships Me with exclusive devotion, he should indeed be regarded as holy, for he has made the right resolution.”

Why does he become a dharmātmā quickly? It is because he is ananya-bhāk: He has made a resolve to be a devotee. Although the resolve is there, he is not strong enough to follow it. So he has two sides to himself. One is that he has resolved to be a devotee and the other is that he is inclined to engage in the forbidden act because of his past habit, sudurācāra. However, he does not approve of his behavior due to being ananya-bhāk. Thus he becomes purified quickly.

But because of habit, past guṇas, he is forced to do it. This means that he is not approving it when he is doing it. That is what is going to save him.

Question: So the mere manifestation of an offense doesn’t mean that the person is necessarily culpable?

Answer: Yes, it is not only the act of an offense but also the intention behind it, which is considered. In modern law, when a crime is committed- for example murder, then the judge studies the intention of the criminal. There could be various reasons for that crime, but the main issue to be studied is whether it was intentional or accidental. Maybe the murderer got into a stage of fury and was not really planning to kill. Or it is possible that he had planned it in advance. These two scenarios, although similar in results, are different in intention.

If someone is committing an offense because he is forced to do it and has no control over it, but he himself is not approving of it, then that is not considered a grave offense. Although it is an offense, it will not create a very bad saṁskāra, However if the person commits an offense and then instead of accepting his mistake tries to justify it, that is a grave offense, which will create a deeper saṁskāra and the person has to suffer heavily for it. When one commits an offense but does not approve of it mentally, one is not feeding the saṁskāra. Gradually one will become purified: Therefore, Kṛṣṇa himself says:

“My devotees who is unable to control his senses, although troubled by the sense objects, generally is not overpowered by them because of devotion to Me, which is more powerful.” (SB 11.14.18)

“A devotee who has faith in hearing My stories and is dispassionate in all fruitive activities, knows that sense pleasures lead to suffering. Yet, he is unable to give them up. He should worship Me with faith and devotion with a firm resolve while experiencing the sense pleasures but disapproving of them, knowing well that the result is suffering. The material desires lodged in the heart of such a devotee are destroyed by the regular practice of the above-mentioned bhakti-yogi.” (SB 11.14.27–29)

This is the difference between two practitioners who may be doing the same activity. One will overcome the problem very quickly while the other one will remain conditioned.

This is the process of anartha nivṛtti.

Question: Do we have any choice? 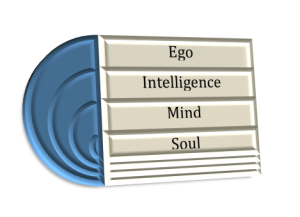 Question: So here is the ātmā, or the jīva. Then we think of the ātmā as surrounded by layers—so there is the mind, the intelligence, and the ego that binds to the body. The purification is occurring in the mind, intelligence and we will lose the ego. None of these have anything to do with the ātmā. Kṛṣṇa is saying, “I am going to see the state of the mind and the state of the intelligence before I will let this jīva into Goloka”. But the ātmā is pure. I don’t understand why Kṛṣṇa is paying attention to the upādhis, the temporary coverings of the ātmā. If ḥe so desired, Kṛṣṇa could just pull the ātmā out of the mind, intelligence—the ātmā has no impurities. Even when it is covered by the upādhis, it has no impurities. Of course we could say that this is Kṛṣṇa’s system, but I just wanted to understand what the logic is here. Why purify something that has nothing to do with the ātmā, and make that a condition for entry into Goloka?

Question: Well, I accept the anādi concept. Ok, that’s how it is.

Answer: Yes, so that is how it is! This is the riddle that cannot be understood merely by logic.

Vidura had asked Maitreya, īśvarasya vimuktasya kārpaṇyam uta bandhanam – How is that the jīva that is conscious under all circumstances becomes conditioned by māyā. Maitreya replied:

seyaṁ bhagavato māyā yan nayena virudhyate—Māyā, which defies logic, binds the jīva. The ātmā is always pure, yet by the power of māyā, he thinks that he is conditioned or he becomes conditioned. The impurity is not inside the ātmā and yet the ātmā remains conditioned by māyā. Therefore the impurity is only in the mind, which is material and works like a hardware that runs by a software called saṁskāras. So purification means changing the software. The mind will not become something else when it becomes purified, nor is the ātmā going to become something else.

So this where our own role comes into play—to change our saṁskāras. This is what Kṛṣṇa teaches in Bhagavad Gītā, to surrender to Him, which means to make a conscious decision to accept Him as the Supreme Regulator and not think of oneself as independent. This is what purification means.

In this regard, Kṛṣṇa says that all actions are happening by the agency of the guṇas of prakṛti: prakṛteḥ kriyamāṇāni guṇaiḥ karmāṇi. One should not think of oneself as the independent agent. At the same time one should not become inactive. One must perform one’s duties while remaining detached from the sense of doership.

Question: Śrī Visvanātha Cakravartī says that the kartā is the ahaṅkāra. He does not even give that credit to the jīva.

Answer: Right, but the ahaṅkāra is not the kartā independent of the jīva’s presence. The ahaṅkāra does not have intrinsic agency in it. It is the ātmā that has the agency, and from the ātmā agency overflows into the ahaṅkāra.