Question:  I am confused about a fundamental aspect of the bhakti-krama, or the gradual development of devotion, as discussed in Rūpa Gosvāmin’s Bhaktirasāmṛtasindhu, as well as the commentaries on this, e.g. Jīva Gosvāmin’s Durgamasaṅgamanī and Viśvanātha Cakravartin’s Mādhuryakādambinī.

My question is – in the development of śuddha-bhakti, what comes first, śraddhā or sādhu-saṅga?  I am not asking about bhakti that is covered by karma or jñāna, which in my understanding is the sort of bhakti discussed in BRS 1.4.15, which says, “in the first instance there is śraddhā, and thereafter sādhu-saṅga” (ādau śraddhā tataḥ sādhusaṅga). Jīva Gosvāmin writes in his Durgamasaṅgamanī on this: 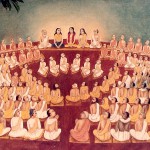 I am not sure I’ve translated this well, but here is my understanding:  “Among the many existing kramas, the one krama that is paradigmatic is discussed in these two verses [BRS 1.4.15-6].  In the first instance there is śraddhā, which is motivated by trust, [and] is the gateway to hearing the śāstra in the company of sādhus; then, i.e. after the first instance or secondarily, there is the company of sādhus, which connects one with instructions about the manner of bhajana.”

This seems to say what Rūpa Gosvāmī said, and this would seem to answer the question.  However, Viśvanātha argues at great length in his Mādhuryakādambinī that the desire to perform bhakti—or the appearance of bhakti—arises only in and through sādhu-saṅga, which would also seem to put sādhu-saṅga before śraddhā.  After establishing that Bhakti only appears in a jīva by her own independent will (just as the Lord only appears in this world by his own will), he writes:

He is a madhyama devotee who has prema for Īśvara, friendship for one who is dependent upon Īśvara, compassion on the naïve, and disregard for the hateful (Bhāgavata 11.2.46).

This not the least bit incoherent because of the existence of the madhyama devotee’s partiality [as discussed in śāstra], and because the Lord is obedient to his devotee, such that his compassion follows their compassion.  On account of that, the cause of the compassion of a devotee is the Bhakti living in the heart of a devotee alone.  Without that [Bhakti that lives in the heart of a devotee], there is no appearance of the convection or creation of compassion; therefore the self-manifesting nature of Bhakti is established.

This would seem to put sādhusaṅga before śraddhā.  Perhaps I am asking the wrong question.  Are the first two steps in the BRS Bhakti-Krama two sides of one coin?  Does sādhu-saṅga come about yadṛcchayā and with that there is jāta-śraddhā (as in Bhāgavata 11.20.7) to perform bhakti?  Is it something like heat and light emerging yugapad with the emergence of agni?

Any help is most appreciated.

Answer: There is no contradiction between Sri Jiva and Sri Visvanatha. You have mistranslated Sri Jiva’s comment.

He says that the sraddha which is stated as the beginning point in the BRS verse 1.4.15, and which leads to sadhu-sanga, is preceded by another sadhu-sanga.

So the order is that by yadricchaya one gets sadhu-sanga that instills sraddha in bhakti. This faith then inspires the person for further sadhu-sanga which results in bhajana-kriya etc.

What makes you think that BRS 1.4.15 is explaining bhakti mixed with karma or jnana?

I am unable to understand this.