Question: Recently, I read my Gurudeva´s Vilapa Kusumanjali, verse 65. In his tika to that verse, my Gurudeva quotes a verse from Sripad Jiva Goswami´s Priti Sandarbha, Anuccheda 65:

“Kṛṣṇa has always placed an all-blissful item of His pleasure potency (hlādinī-śakti) within the hearts of His devotees, and when it is captured in the devotee’s heart it shines there as prema.”

Since you are a scholar in these matters I wanted to ask you a question:

It seems that this verse says that a part of the hladini sakti is eternally placed in the hearts of the jiva.

Answer: No, it does not seem to say so. Read it again. Even the English translation has no 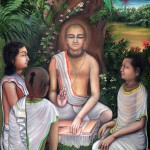 word such as “jiva” in it. The Sanskrit word used is bhakta-vrindeshu, and the translation is very clear, “His devotees”.  Moreover, he uses the indeclinable eva (“only”). This energy exists only in devotees. So from where does the word jiva creep in?

Such a mistake is made because of our preconception. We see what we already have in our mind. So have no misgivings. Sri Jiva Gosvami is not saying that at all. He is speaking about Krsna’s eternal associates. You have to read the context and understand what he is trying to explain.

Question: How would you translate this part of the anuccheda?

Answer: I translate it differently but even what you have does not convey the meaning you are suggesting.

Question: The key seems to be the word “NITYAM”. Does the presence of the word nityam not imply that prema is dormant in the heart, if it is there eternally?

Answer: Yes, when our mind is fixated on a misconception, this is how we will misconstrue the meaning, although there is no talk of dormant prema here. It clearly says bhaktavrindeshu niksipyamana – “placed in the devotees”, not that it is already there. No word that means dormant has been used in this text. Moreover, Sri Jiva Gosvami never says that prema is dormant in the jiva. He has done a very elaborate and minute analysis of priti or prema in Priti Sandarbha. He clearly says that prema is hladini sakti and that it comes from Krsna. If it were dormant in the jiva, he would have said it.

The reason why you may think like this is because there are two contradictory words in this text, nityam (eternal), and niksipyamana (being thrown). If it is being thrown or placed, it cannot be eternally there. If it is eternally there, then it cannot be placed there. So why does Sri Jiva Gosvami use such contradictory words? Is he confused? Certainly not. He has a purpose in such usage. He wants to say that the eternal devotees have hladini sakti eternally. Then why say that Krsna places it? This is to convey that ultimately Krsna is in control. Otherwise it could be understood that devotees were independent and that would not need Krsna in order to have devotion or hladini sakti. The basic philosophy of the Bhagavatam is that there is only one tattva which is non-dual, advaya-jnana (SB 1.2.11). Sri Jiva Gosvami has that in his mind and it is to convey this idea that he has used such a language. Language has certain limitations while explaining the Absolute Tattva. Yet it is the only means to explain.

Question: With a straw between my teeth, could you please send me a translation of just that part?

Answer: “Some particular aspect of hladini sakti, which is most blissful, eternally entrusted only in the devotees, exists by the name of priti for Bhagavan.”

Question: ​Thank you very much. ​So NITYAM refers to PREMA being ETERNALLY placed into the hearts of the eternal associates? And by performing bhakti, this prema is infused into our hearts. 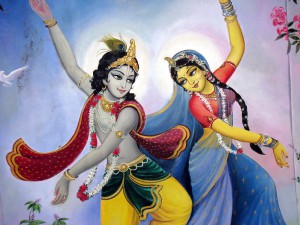