Knowing that section that Gaudiya tradition is based on have interpolations etc, how do you reconcile this view with the view of traditionalists who seem to insist on sastric authority as a rigid codified letter? I am confused by it.

Answer: Just because something is interpolated, according to some scholars, does not mean it goes against the siddhanta. these three chapters have nothing which upsets the Gaudiya siddhanta. So what is the confusion. Suppose Krishna did not really uplift the Govardhan hill, then why should it cause a confusion.

Sastra is authority but sastra is not history. Sastra is teaching philosophy and sadhana. People have this confusion that sastra is a description of historical events. That is not the case. Vyasa is not a historian. I am in the process of writing a book entitled ‘How to understand sastra’.

Question: ShrIdhara SvAmi, whom all Gaudiyas consider authoritative, mentions in the MaNgala shlokas of his BhAvArtha-dIpikA commentary on BhAgavata, that  the number of chapters in the BhAgavata are “dvA-triMshat tri-shatam” or 332. But it turns out that upon adding the three chapters (12-14) from the 10th canto, the number of chapters becomes 335, not 332. How then should one understand why ShrIdhara wrote 332, but ended up commenting on the extra three chapters as well?

Answer: Because many scholars have translated Shridharas words as 335 and not 332. One such example is Vamshidhara who wrote an explanation of Sridhara’s Bhavartha-Dipika called Bhavartha-dipika-prakasha. He is not a Gaudiya scholar. Otherwise it does not make sense that Shridhara comments on these three chapters and does not say that they are interpolated. He could have written just one word – priksipta – to indicate that they are interpolated.

In Vraja there is village called chomuha (lit. fourheaded) to commomerate this pastime. Of course this could be an invention of Gaudiyas, one might argue.

Bopdeva, who lived in the 12th century, much before Gaudiyas were born, wrote Harililamrita in which he lists the Brahma vimohan lila. For some time some scholars even thought that Bopdeva wrote the Bhagavata. So one cannot say that Gaudiyas have interpolated these three chapters.

Question: Since Madhva’s recension of BhAgavata (the Vaishnava recension) does not have Brahma Mohana, on what basis can they claim that it was there and yet Madhva did not comment on it? (The same applies for Vijayadhvaja Tirtha who lived prior to Jiva Goswami etc and who commented on all verses, and whose recension does not have the 3 chapters which include Brahma Mohana).

Answer: It must be noted that the two sampradayas which reject these three chapters are Madhva and Vallabha. All others accept them.  For Madhva Brahma is the topmost devotee and the gopis are the heavenly girls. So it is a problem for him to accept these three chapters where Brahma is humiliated. Madhva also commented that Putana went to hell. He has a theory of three types of souls, and killing demons and liberating them does not fit in it. Vallabha was very much influenced by Madhva. He also has the three type of souls theory. It is well known that Vallabha was in close association with Madhvites in Vijayanagar during his South India tours.

Question: Vyasa Bhatta, son of Parashara Bhatta (disciple of Ramanuja) rejected these three chapters in his commentary on Bhagavatam. Viraraghavacharya mentions this too in his commentary (that his predecessor dismissed it as spurious), and says that he will still go ahead and comment on it only because some others have done it.

Answer: He also says that because they are utilized (vyavahriyamanatvat), which probably means used in plays etc. It means these pastimes were popular even in the South.

Question: The Vishnu Purana, which also deals with Krishna’s life and lilas in Vrindavana, and which has not been mangled by interpolations as much as other Puranas apart from Vishnu and Bhagavata (as per Bannanje Govindacharya), due to their being studied and commented upon by traditions for a long time – does not have the Brahma Mohana lila.

Answer: This does not prove anything. Vishnupurana is not stressing that Krsna is svayam bhagavan, but Bhagavatam is, and that is why this pastime is very vital, especially to Gaudiyas. To others it may not matter. They are happy to accept Krsna as an avatara.

The Bhagavatam is something special. It is based on the pricipal of rasa- pibata bhagavatam rasalayam. Other sampradayas are not so much concerned with the rasa principle.  For Gaudiyas this is the essence. Hence the tug of war. These three chapters are the commentary of the krsnastu bhagavan svayam verse, which is the foundation of Gaudiya Vaisnavism. 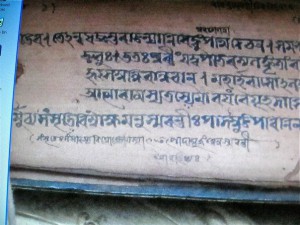