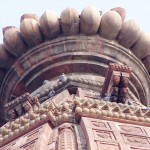 Question: We have many cases of interpretations where acharyas differ from each other, or where they give additional information not mentioned in shastra. What exactly is the criterion for accepting such accounts, besides the general principle to stick to what our own line is teaching? To give an example, Rupa Goswami explains in Laghu-bhagavatamrita that Yasoda gave birth to twins, and when Vasudeva brought his son and exchanged him for Yasoda’s daughter, the two boys merged. Brhad-bhagavatamrita, on the other hand, seems to support the traditional idea that Krsna is Yasoda’s foster son. If you could kindly throw some light on that.

1. The Lord is unlimited and has many sides, many possibilities. Different devotees can have different realisations according to their bhava.

2. It is not necessary that something you think to be not mentioned in shastra is really not mentioned. You have not seen all the shastra. Besides, shastra may not give details of everything. It may be there in shastra as a hint or in seed form, which may escape us if we do not study it minutely. Many times I see great acharyas bring out points from shastra which we would not notice ourselves, as Lord Caitanya brought out prema bhakti from Srimad Bhagavatam.