Home  |  Deliverance through the Name

Deliverance through the Name 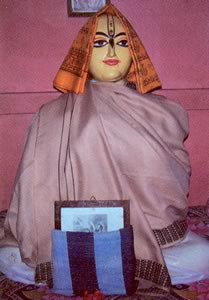 One day Śrī Caitanya Mahāprabhu met Haridāsa Ṭhākura as usual, and in the course of discussion He inquired as follows, “My dear Ṭhākura Haridāsa, in this Age of Kali most people are bereft of Vedic culture, and therefore they are called yavanas. They are concerned only with killing cows and brahminical culture. In this way they all engage in sinful acts. How will these yavanas be delivered? To My great unhappiness, I do not see any way.”

Haridāsa Ṭhākura replied, “My dear Lord, do not be in anxiety. Do not be unhappy to see the condition of the yavanas in material existence. Because the yavanas are accustomed to saying ‘hā rāma, hā rāma‘, they will very easily be delivered by this nāmābhāsa. A devotee in advanced ecstatic love exclaims, ‘O my Lord Rāmacandra! O my Lord Rāmacandra!’ But the yavanas also chant, ‘hā rāma, hā rāma!’ Just see their good fortune!” (Śrī Caitanya-caritāmṛta, Antya 3.49-54)

An otherwise sinful person can be delivered by chanting the Holy Name even to indicate something else. Can you clarify what it means when Haridāsa Ṭhākura says “easily delivered”?

Does it mean that an otherwise sinful person who says “hārām” will go back to Godhead at the end of their life? Achieve impersonal liberation? Get a chance to become a devotee in a future life?

How does the position of one of our devotees, who is consciously trying to chant the Holy Name, but who may commit many offenses, compare to a sinful person who unknowingly chants the Name to indicate something else? A devotee follows principles at least better than most materialists, follows many aspects of devotional culture, does not kill cows and brahminical culture, etc., but may maintain material attachments, chant inattentively, neglect the order of their spiritual master, maybe even be critical of Hare Krishna leadership and thus commit Vaiṣṇava aparādha. Is such a devotee, guilty of committing offenses to the Name, in a more fortunate position or a less fortunate position than a sinful yavana who occasionally chants nāmābhāsa?

Thank you very much for your time! Hare Krishna.

Answer: The name of Krsna is nondifferent from Him because He is absolute, devoid of any duality. Being nondifferent from Him, the Name is potent like Him. Therefore, the Name can grant everything, whether chanted knowingly or unknowingly. But there is a condition. That is that the chanter must be free from offense. Indeed, bhakti is very simple and easy for a person who is free from offense, but as long as the offense is there, the Name does not manifest its power fully. Just as if a person puts a match stick to a stack of hay, then it will immediately burn – provided, the hay is dry. If it is not dry, then the matchstick will not burn the hay but will evaporate some of the water from it and then extinguish. Similarly, if a person is only sinful but not offensive, then such a person can be delivered even by nāmābhasa, but if one has committed offenses in this life or past lives, then the Name or nāmābhāsa will first work to neutralize the offense and the person is not going to be “easily delivered”.

The example of Ajāmila, which is given later on by Haridās Thākur, is such a case. Ajāmila was sinful, but not offensive. Therefore he got delivered by nāmābhāsa. But this does not happen to people in general who all chant nāmābhāsa. This shows that they are not free from offense.

A person who gets delivered by nāmābhāsa will not attain impersonal liberation but will go to the abode of God at the end of his life. The case of Ajāmila is a little special. Not only that he chanted nāmābhāsa, but he did it very affectionately, because he had much affection for his son, whose name was Nārāyaṇa. Therefore he was given the opportunity to practice devotion in the same life and when he attained love, he entered into Vaikuṇṭha. So the type of mukti that one will get from nāmābhāsa will also depend on the mood in which one chants nāmābhāsa, besides being free from offense.

Certainly attaining prema is much superior, even if it comes belatedly. One may argue that Ajāmila got prema in the same life. In his case, it is to be understood that when he got prema, he was no more a non-believer, but he was affected by the dialogue between the Viṣṇudūtas and Yamadūtas and understood the supremacy of bhakti over varnāśrama dharma. Thus he gave up his home and family and went to Haridwar, where he attained pure devotion. So it was not nāmābhāsa that led him to achieve prema, but the Name. Formore details on this subject you may read my book “Nāma Tattva.”