Home  |  The Mechanics of Darshana

The Mechanics of Darshana

Question: I have a question about the mechanics of darsana – through what mechanisms
or instruments does the qualified bhakta actually perceive Krishna (since the atman has no inherent senses)? 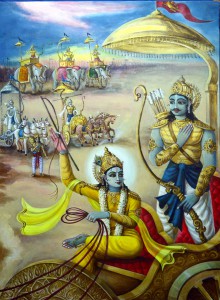 Krishna and Arjuna on the battlefield

In the Gita, Krishna has to give Arjuna divya caksus. Granted this is to see the virat rupa, as otherwise Arjuna is able to see Krishna’s two armed form without divya caksuh, but this seems to be one way in which darsana can transpire – something like the Brahman body that the liberated soul is bestowed in Vaikuntha or Goloka – the attainment of a new body with senses with which to see and serve Isvara. So it seems possible the accomplished devotee in this world could likewise be given some sort of Brahman sensory instruments in a parallel manner. But this does not seem to be the whole story since, as noted, Arjuna doesn’t need any special instrumentation to see Krishna’s regular form, nor does anyone else in Kurukshetra and elsewhere.

So another option is Krishna makes himself visible to the regular prakritic senses – the jnana indriyas made from the gunas.  If this is so, how does this transpire, since we know from the Upanisads onwards, that ‘thought does not reach there’, ‘it cannot be seen’ etc. If Krishna’s body is citi-sakti, it cannot be perceived by prakriti tattvas or indriyas. And since Brahman is eternal, it can never be changed, viz, transformed into prakriti– cetana cannot become acetana. So, other than saying this is Krishna’s acintya shakti, is there any way to make sense of this with the rational mind, given that Jiva strives so hard to be rational in the Sandarbhas?

In the case of Dhruva, Vishnu appeared inside and then outside.  If he appeared inside, then Dhruva did not perceive him with his senses. In this case, he must have appeared to him in the mind. Does this mean that Vishnu manifests as a samskara? The same problem occurs here – the mind can only conceive of things made of samskaras, which are ultimately imprints from mahabhauta sense impressions – visaya. One could perhaps say that, just as Isvara can permeate murti or mantra made from mahabhauta, he can also permeate samskara by exactly the same methods.

And, finally, when he disappeared and Dhruva opened his eyes, Vishnu appeared outside, which goes back to the same question above – if he was using the regular senses and not divyacaksus, how could Krishna’s form of pure consciousness be perceived by bhautika senses?

Does Jiva or anyone discuss such things – the mechanics of darsana? Hopefully this is not one of those ‘acintya‘ responses. Thanks for any thoughts, here.

Answer: Darsana is possible in this very body with theses senses by the power of the intrinsic potency, antaranga-sakti of Bhagavan. When the senses get imbued with the antaranga-sakti, they can see the Lord. Just as the material senses can perceive material objects, they can perceive a spiritual object when empowered by the intrinsic or spiritual potency. You may know the famous verse from Bhakti-rasamrita-sindhu:

“The Name and so on of Sri Krishna cannot be perceived by the material senses. However, when one becomes inclined to serve Krishna, then the Name manifests on one’s tongue [and similarly, form becomes visible to the eyes ].” (BRS 1.2.234)

So just as the pure Name can manifest on this very tongue, the form of the Lord can manifest in these very eyes or in the mind. The Brahma samhita verse 5.38 also says the same thing:

When it is said that the mind and senses cannot reach Him, that is for ordinary people, because paranci khani vyatrnat svayambhu parann pasyti na antar atman, “Brahma designed the sense to go outwards, therefore ordinary people only see external sense objects, not the inner self” (Kathopanisad 2.1.1) but later the same Upanisad mantra says, kascid dhirah prayag atmanam aiksadavrta caksur amrtatvam icchan. “A person of controlled mind sees the inner self with open eyes while desiring nectar (or  immortality).”

In Gita 7.20, Bhagavan Sri Krishna says, “Then seeing the Self with one’s mind in one’s self one becomes satisfied.”

So there are many statements in the Upanisads, Puranas, and in Gita also which explain that one can have darsana with these senses when the senses get purified. When one is on the level of bhava, then this antaranga-sakti enters into atma; that is why it is called sthayi-bhava. Then, when prema manifests, the senses get the ability to perceive Krishna. 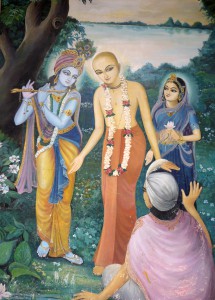