By Satyanarayana Dasa: Today, the whole world is in the grip of economic crisis. The Dow Jones is dropping everyday like the mercury in a winter thermometer. There is panic all around and a sense of uncertainty about the future. The newspaper headlines create fear in all. The U.S. is the epicenter of this economic cyclone 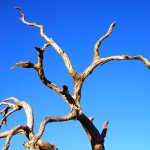 Today, the whole world is in the grip of economic crisis. The Dow Jones is dropping everyday like the mercury in a winter thermometer. There is panic all around and a sense of uncertainty about the future. The newspaper headlines create fear in all. The U.S. is the epicenter of this economic cyclone called R. Thasur (artha-asura or demon that destroys the economy).

A cyclone takes birth when there is a great depression. This economic cyclone, however, produces a great depression. It has been largely created by a group of people called capitalists. They have a mantra called consumerism. The essence of this mantra is private ownership and control of the economic instruments of production to gear up economic activity for making profits. Everybody is free to join this group by paying the price of competition. Those who can amass substantial profit stay in the club and the unsuccessful are eventually kicked out.

Standard of living better than the kings

Before the cyclone appears there is a nice cool breeze that makes everyone feel comfortable. No doubt capitalism has done wonders in uplifting the life style of people in general. The luxurious life and facilities which were available only to the royalties of the past are now enjoyed by the gentry. In fact, in developed countries the standard of living is even better than that of kings—with fast cars, good highways, multiple baths in every home, high definition televisions with hundreds of channels available twenty-four hours a day, cell phones, the omnipresent internet, and convenient microwave ovens—everything at your fingertips.

But the economy cannot keep on growing indefinitely. The earth’s resources are limited, but population and consumption go on increasing. Moreover, there is no restraint on growth or consumption. It goes on increasing with the growing economy. Economic growth is dependent on consumption, and inversely, consumption is dependent on economic growth. If people stop consuming, the economy will collapse. Therefore, sometimes even the government gives “economic stimulus checks” to citizens in order to boost the economy through increasing product purchases. Interest rates are cut and loans are given at lower rates so that people can consume more freely. Consumers are subtly proselytized to consume to keep the economy going. Billions of dollars are pumped into advertisements to convince and allure people to buy products whether they need them or not.

Ultimately, all this leads to waste, depletion of resources and pollution of natural resources. The success of an advertisement lies in the creation of a feeling of desire in the mind of the consumer. In other words, modern economy very much runs on global greed! Greed is defined as the acquisitive or selfish desire beyond reason. In the U.S. there are more cars than licensed drivers. Americans purchase so many things that they cannot store them in their homes. There are storage rental facilities built across the American landscape to provide space for these acquisitions. Renting of storage units is a 20 billion dollar business in the U.S.— larger than the motion picture business! All technological gadgets have new models appear on the market with better capability or extra features. People buy new models and throw away the old ones. The U.S. spends more on trash bags than ninety other countries’ total purchases. In other words, the receptacles of the U.S.’s waste cost more than all of the goods consumed by nearly half of the world’s nations.

Unfortunately, there is no education in restraint or contentment. According to Vedic philosophy, such consumerism is bound to end up in misery. It is not based on making a society of peaceful people.

Michael Moore’s documentary “Bowling for Columbine” was inspired by two incidents in America. The first was the massacre at Columbine High School and the second, when a six year old boy shot dead a little girl just because he had a gun and nothing better to do! His mother was juggling jobs to keep the family going, but had no time for him.

Gateways to the abode of misery

In modern society many people hold two jobs to pay for their bills and maintain their house. They often travel long hours and have no time for their family. This is the outcome of modern economy, based only on consumerism, which is but a euphemism for greed. In Bhagavad Gita Lord Shri Krishna counts greed as one of the three gateways to the abode of misery. He also says that such people, being attached to the pleasure of senses are bound to suffer and feel frustrated.

This is very evident from the current economic situation, especially, in the United States where two major banks have collapsed and there have been four million foreclosures. Some people have been forced to live in tents. This situation has been created by unrestricted consumerism.

Chanakya Kautilya, author of  Arthashastram (The Economics), a book on politics and economy written more than two thousand years ago, says that the state should maintain a balance between moral discipline (dharma), economic pursuits (artha) and consumption of goods (kama)—dharma-artha-avirodhena kamam seveta. That is to say, one should consume products in a way that it does not breed corruption and immorality in society and does not make one bankrupt. He warns that if a nation gives abnormal importance to any one of these, then the other two will collapse. A healthy mix of these three is necessary for the peaceful functioning of a society or state.

Even sage Vatsyayana, the author of  Kamasutra (Laws of Sensual Pleasure), a book delving into principles about how to enjoy material life, advises that one should not enjoy life at the expense of moral discipline and economy—parasparasya anupghatam trivargam  seveta. In Vedic society, consumerism was never encouraged. It recognized four human pursuits, namely, dharma, artha, kama and moksha. The first three relate to life here and the fourth to life after death. The goal of life is to attain happiness without intervention of miseries. That is possible only by leading a balanced life. The balance should be within an individual, in the society and with the environment. The most important is the balance within an individual. Society is made of individuals and if individuals lead a balanced life, then the society will be balanced. If society is balanced, the environment will remain pure and clean.

The problem starts with the mind of an individual and then it manifests beyond like an infectious disease. Keeping this in mind, the first of the four human pursuits has been suggested as dharma or basic principles of life such as non-violence, truthfulness, unselfishness and contentment.

This certainly goes against the consumerist society which thrives on greed and dissatisfaction in every situation. This gives birth to R. Thasur.

Fortunately though, some Northern European nations took a political decision to first organize society and then let the economy arrange itself around it. They never seriously contested America’s boast that its profit and productivity were higher than those of theirs. They took a conscious decision that what mattered most was that children are well taken care of by their mothers, that the elderly be respectfully treated and the sick have proper medical provisions. Once these conditions were agreed upon, the market was allowed freedom. This is quite close to what Chanakya has suggested. India, however, is blindly following the superpower model neglecting its indigenous wisdom. It is high time that she learns from the experiences of the United States.