Home  |  Complain? Or be Grateful?

Complain? Or be Grateful? 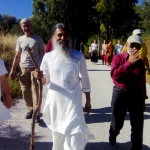 We have a choice: We can complain about what we are missing, or we can be grateful and celebrate what we have. Most people choose to complain. Obviously, we are all quite dissatisfied with our present state. Our only inspiration is the hope of being satisfied in the future. Our only respite is the memory of a miraculously pleasant time in our past.

Indeed it is the very nature of the mind to focus on what it does not have, and pay little attention to what it does have. We take things for granted, and do not realize the value of something we have until we lose it. A fish does not realize the true value of her lake until she is plucked out of it. The value of a tooth is not really understood until it falls out. Our health does not get too much attention unless we are threatened with illness.

We have the human form of life, a great boon, but we do not pay much attention to this fact. We would appreciate it much more if we were suddenly transformed into a mouse or a fish. Any cat or bird can devour a mouse. Any bigger fish can devour the poor little fish. These creatures cannot appeal to a court or file a complaint with the police. We take our basic rights as human beings for granted when in fact they are so rare and valuable. We can walk on two legs, use our hands freely, and communicate our thoughts and feelings in great detail using words. Imagine if these facilities were taken away. Life would seem troublesome, to say the least.

Once a sadhu was walking from one village to another. On the way he met a young man who looked very gloomy and dejected. The sadhu felt compassion and asked, “Why are you morose?” The young man began complaining, “I am so unfortunate. I was born to poor parents who died when I was just a young boy. I did not inherit any property, so I have nothing. It is hard just to maintain my life, so I feel like committing suicide. I see no light in life, just suffering.” The sadhu heard him patiently and told him, “Walk with me to the next village, I will help you. In that village I will arrange for a lot of money to be given to you.”

The young man was surprised and doubted the sadhu, but thought he had nothing to lose. At the next village, the sadhu took the young man to the home of a rich merchant who was his disciple and very happily received his guru. After a private talk with the merchant, the sadhu told the depressed man, “This merchant is ready to pay four lakh rupees [about $6,000] in exchange for both of your eyes.”

The young man was shocked and refused. “I do not want to be blind!” “OK,” the sadhu said. “Then he is also prepared to pay three lakhs for both of your hands.”

In this way, the sadhu put a price on each limb of the young man’s body, attempting to show him the great wealth he already possessed but did not recognize.

In fact, with a human body we can attain much more than wealth, we can attain God Himself who owns all wealth. Bhakta Prahlada said to his friends, “The human body is temporary, but it can give eternal benefit because with it we can attain love of God.” The human body is therefore very uncommon – it is not at all common for a temporary object to be able to give permanent benefit! Yet most humans use their life only to pursue temporary ephemeral objects, leading only to frustration and suffering. Unfortunately, in my experience, even most of those who understand the potential of human life nonetheless remain obsessed with petty affairs of envy, jealousy, anger, and material attachments. They waste their time in criticizing other sadhakas, brooding over mundane goals, or complaining about something or other. They too do not really appreciate the rare opportunity they have been given, without them really much desiring or deserving it. In a sense, they are more unfortunate than the ignorant masses because they have a rare, wonderful guest in their home but remain obsessed with some everyday activity like watching television or checking their smartphones.

There is a general principle: If we appreciate what we have, we will be given more. And, on the contrary, if we only complain, we will lose even what we have. Again, I have unfortunate personal experience of this. Some devotees got the opportunity of being in the Holy Land of Vrindavan, and the good fortune to render service to Gurudeva and sadhus, but instead of appreciating that opportunity they gave more energy to complaining about the discomforts of the ashrama, the noise or garbage in Vrindavan, or something or other about the food, weather, people, and so on. Soon, they had to leave Vrindavan and thus lost their uncommon opportunity for seva. Some of them got completely lost in material affairs. Of course whatever seva they did will not go waste, but because of complaining and fault finding their progress was put on hold.

In his prayers to Gopala Krishna, Lord Brahma says:

“Let us live in this world bowing down to You with all our heart because of seeing Your grace all around us even while we experience the difficult results of our past actions. Such a person inherits the feet of Bhagavan, the giver of liberation.” (SB 10.14.8)

This is excellent advice! It is not mere imagination that the grace of Bhagavan is upon us. It is a wonderful fact, although we do not pay much attention to it. Even the simple act of breathing, which is so crucial for our survival, can happen only by His grace. If we had to make conscious effort to breathe, it would consume all our attention and we would hardly be able to do anything else. Nor would we ever be able to sleep!

Commenting on Brahma’s words, Sri Visvanatah Cakravarti writes that a devotee is beyond the influence of time and karma. Thus any favorable or unfavorable situation he or she faces is not the result of his or her past karma, but is granted by Krishna Himself for the devotee’s benefit. Krishna, he writes, is like a compassionate father who may sometimes make his little sick child drink bitter medicine. The child may not like it but father’s intention is not to trouble the child. He wants that child regains good health. Similarly we are sick by our material conditioning. Krishna sometimes puts us in a difficult situation to purify us. This is His grace on us. We should not complain against it. We may not appreciate the difficult situation when it befalls upon us, but later we may realize that it was the best thing that could have happened to us.

Sometime ago I read the following amazing story of a person who became materially successful against all odds:

Peng Shuilin is 78cms high. In 1995 a freight truck sliced his body in half. His lower body and legs were beyond repair, but surgeons sewed up his torso. Shuilin, now 37 years old, spent nearly two years in a hospital in southern China, undergoing a series of operations to re-route nearly every major organ and system in his body. He kept exercising his arms, building up strength, washing his face and brushing his teeth, and survived against all odds. Now Peng Shulin has astounded doctors by learning to walk again after a decade. Considering his plight, doctors at the China Rehabilitation Research Centre in Beijing devised an ingenious way to allow him to walk on his own: a sophisticated egg-like casing to hold his body, with two bionic legs attached. Peng has been walking the corridors of Beijing Rehabilitation Centre. When Shulin first walked, he exclaimed, “Oh, so satisfying to ‘walk’ again after ten years with half a body!” Hospital vice-president Lin Liu said: “We’ve just given him a checkup; he is fitter than most men his age.”

Peng Shuilin has opened his own bargain supermarket, called the Half Man-Half Price Store. The inspirational 37-year-old has become a businessman and is used as a role model for other amputees. At just 2ft 7ins tall, he moves around in a wheelchair giving lectures on recovery from disability. His attitude is amazing, he doesn’t complain. “He had good care, but his secret is cheerfulness. Nothing ever gets him down.” His life is a feat of endurance, a triumph of the human spirit in overcoming extreme adversity.

Next time you want to complain about something trivial, don’t. Remember Peng Shulin instead. You have a complete body with legs to move. You are on the path of bhakti which is most rare phenomenon. So don’t complain. Be cheerful. Be grateful about what Krishna has given you by His causeless grace. See His grace in everything around you. By this attitude you will get more grace.

This is Brahma’s advice.