Home  |  Can Kṛṣṇa Be Attained Through Enmity? (Part 1)

Can Kṛṣṇa Be Attained Through Enmity? (Part 1)

March 27, 2015Articles by Satyanarayana DasaGaudiya PhilosophyShastraComments Off on Can Kṛṣṇa Be Attained Through Enmity? (Part 1)

In the Seventh Canto of Śrīmad Bhāgavatam, there is a very interesting dialogue recited by Śrī Śukadeva Gosvāmī about the liberation of Śiśupāla who was killed by Kṛṣṇa during Yudhiṣṭhira Mahārāja’s Rājasūya-yajña. Śiśupāla was Kṛṣṇa’s cousin, but hated … 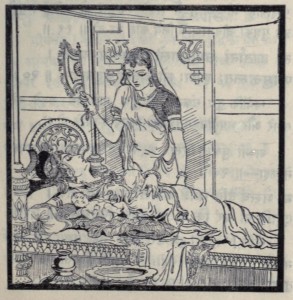 In the Seventh Canto of Śrīmad Bhāgavatam, there is a very interesting dialogue recited by Śrī Śukadeva Gosvāmī about the liberation of Śiśupāla who was killed by Kṛṣṇa during Yudhiṣṭhira Mahārāja’s Rājasūya-yajña. Śiśupāla was Kṛṣṇa’s cousin, but hated Kṛṣṇa since his very birth. At the first sight of Kṛṣṇa, he would start insulting Him, but Kṛṣṇa always remained tolerant, not showing any sign of disturbance. Kṛṣṇa had promised Śiśupāla’s mother, his maternal Aunt, “I will tolerate one hundred abuses from your son, but the day he crosses this limit, I will take action.”

Kings from all over the world attended  Yudhiṣṭhira’s Rājasūya-yajña. It is a Vedic custom that guests should be received and honored like God, so a ceremony of honor was scheduled for all these royal guests. The question arose as to who would get the first worship. Although everybody would receive the same type of worship, the most honorable in the assembly would be worshipped first. The same principle can often seen in Indian temples during the ārati ceremony when the ghee lamp which has been offered to the Lord is rotated around to the assembled devotees. Similarly, during Kumbha Mela, the most respected mahant or ācārya enters the holy river Ganga before all others.

After a big discussion on this issue, it was finally decided that Bhagavān Śrī Kṛṣṇa should get the honor of first-worship, even though great sages like Nārada, Vyāsa, Parāśara, Vasiṣṭha, Maitreya, Viśvāmitra, Paraśurāma, Kaśyapa, great devas like Indra, and Varuṇa, and respectable elders like grandfather Bhīṣma were present. Śiśupāla objected, and started criticizing and insulting Kṛṣṇa. Kṛṣṇa tolerated it, but Śiśupāla was relentless and full of anger. Kṛṣṇa reminded him that he was nearing the limit of His promise to Śiśupāla’s mother, but Śiśupāla paid no heed. As soon as Śiśupāla crossed the mark of hundred abuses, Kṛṣṇa evoked His Sudarśana Cakra and cut off his head. 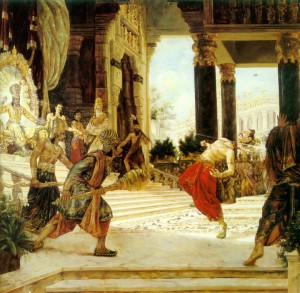 Then an amazing thing occurred: The ātma of Śiśupāla came out of his body and merged into the left foot of Kṛṣṇa, signifying that Śiśupāla attained freedom from bondage to the material world. Everyone including King Yudhiṣṭhira was surprised to see this.

Yudhiṣṭhira asked Nārada, “How is it that Śiśupāla, who was full of hatred towards Kṛṣṇa, attained mukti, which is so rare to achieve even by great sages?” Yudhiṣṭhira gave the example of King Veena, who was also very critical of Bhagavān Viṣṇu and was killed by the sages, but did not attain mukti. Indeed, it is widely understood that even to hear criticism of Bhagavān or His devotees is deleterious to spiritual progress. As it is said in Śrīmad Bhāgavatam:

“One who hears the criticism of Bhagavān or His devotees and does not leave that place, will fall down losing all his merit. What to speak of the person who speaks the criticism?” (SB 10.74.40)

The phrase “what to speak” (api) indicates that one who criticizes Bhagavān or His devotees will certainly meet an even worse destination than what is described.

Yudhiṣṭhira Mahārāja asked Nārada why Śiśupāla did not develop leprosy on his tongue or go to the darkest region of hell, instead of merging into the body of Kṛṣṇa. There is a popular smṛti statement, “A person meets the result of very severe sin or pious deeds in this very life.” This implies that Śiśupāla should have received the reaction to his offenses without delay.

Śrī Nārada then gave a very elaborate answer to Yudhiṣṭhira’s questions, an answer which contains the heart of rāgānuga bhakti. He explained that criticism, praise, honor, and disrespect are only related to the physical body. When one thinks the body to be the self, one considers the praise or criticism, honor, or dishonor given to the body as if it were praise (etc.) of one’s own self, and therefore feels elated, or angry. Bhagavān does not have such a dualistic mentality, which arises from misidentification with events unfolding in prakṛti, therefore praise or criticism given by materialistic people does not affect Him.

One identifies with the physical body because of lack of discrimination between prakṛti and puruṣa. Śrī Jīva Gosvāmī says that foolish people criticize the characteristics of the body, which are products of tamas and rajas. All such criticism is actually only within the realm of prakṛti or the material guṇas, but Bhagavān’s body is beyond the guṇas of prakṛti. Therefore, any such criticism is not applicable to Him. Moreover, Bhagavān does not identify with prakṛti and its evolutes. Thus any such criticism does not bring any pain to Him. In Bhagavad Gītā, Śrī Kṛṣṇa says that He does not reveal Himself to materialistic people and remains covered by the veil of Yogamāyā (Gītā 7.25).

When Arjuna asked about the symptoms of a person who has transcended the guṇas of prakṛti, Kṛṣṇa replied,

“A person is beyond the guṇas of nature if he is equal in happiness and distress, situated in the self; regards a clod of mud, a stone and piece of gold as equal in worth; is alike towards favorable and unfavorable objects and situations; is sober and views alike censure and praise; is equal in honor and dishonor; treats a friend and foe alike; and has renounced all undertakings.” (Gītā 14.24-25)

If that is true for a jīvan-mukta, a liberated person still living in the material body, then by argumentum a fortiori, certainly such criticism as pronounced by Śiśupāla does not influence Bhagavān Śrī Kṛṣṇa.

Then why did Kṛṣṇa kill Śiśupāla? After all, He was not disturbed by his abuses because they were not related to Him. Kṛṣṇa killed Śiśupāla for his benefit, as can be seen in the fact that by being killed, Śiśupāla became liberated. Additionally, Kṛṣṇa killed Śiśupāla to benefit those who were suffering because of listening to his insults cast upon Kṛṣṇa.

Unlike conditioned living beings, Kṛṣṇa’s self and body are nondifferent, therefore He does not have a material body. As a consequence, He does not identify with a material form under the influence of ignorance, as is the case with ordinary living beings.  Therefore also no one is dear to Him, nor does he hate anyone, as He Himself says in Bhagavad Gītā:

“I am equal to all beings. There is no one hateful or dear to Me, but they who worship Me with devotion are in Me and I am also in them.” (Gītā 9.29)