Brain and Mind / Progress in Bhakti

Relation of Brain and Mind

Question: What is the role of the brain in Vedic Psychology and what is the relationship between mind and brain?

Answer: The sense (indriya) and is organ (golaka) are two different things. For example, there is a sense of seeing and there are two physical eyes, which are the golakas for this sense. The senses are part of the subtle body and the organs are in the physical body. The senses perceive or act through the organs—the sense of hearing or seeing works through the visible eyes or ears. What you call the mind (manas) in Vedic psychology is part of the subtle body and the brain is the organ through which it works.

Question: Modern doctors think that psychological illness is due to some disturbance in the chemical composition in the brain, but the Vedas say that it is due to the mind and the disturbance in doṣas. Then why do allopathy and homeopathy work for mental illness to some extent?

Question: What is the mechanism behind mental, auditory and visual hallucinations? How are these hallucinations related to the brain and the kapha, vāta and pitta doṣas?

Answer: They happen because of a change of chemicals in the brain caused by the imbalance of the doṣas. As said above, the brain is the organ of the mind and the mind is the internal sense through which we perceived the external world with the help of the external senses. The external senses send data to the mind, which originate in the organs, but the same effect can also be produced by a change in the chemicals in the brain. So the mind does not differentiate whether the data came from the external world or whether it originated in the brain, just as when you dream at night, you do not know that this is just a dream and not real. Hallucinations can also give the same effect.

Question: Unless a person has a firm conviction, he or she will not take interesting in doing an activity, whether material or spiritual. We may know that we are soul, not the body, but what is the use of knowing it theoretically? Unless we understand and experience it by taking shelter of a realized guru, how can we move forward? 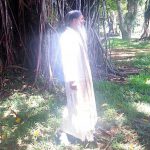 Answer: There are many things about which we have no experience but we still believe in them. And we act on the basis of our belief. No one has the experience that this is the only life we live, or that there is no rebirth, but many believe there is only one life and act accordingly. Similarly, you can act on the belief that there is a law of karma and rebirth. Most of the things we do in our life are based on belief and not on experience. Therefore, if you believe that we are not the body but ātmā and the material body is the conditioning for the ātmā resulting in suffering in the form of birth, death, disease and old age, then you can try to find a solution for this suffering. If you believe that ātmā never dies and reincarnates, carryings its karma from the past, then you can be mindful of your actions so that you don’t create bad karma. Otherwise, why would you even approach a realized guru? The belief comes from good association.

Question: What is the fault of those who are materially attached and thus forced by the modes of nature to do sins like murder, illicit sex, cow killing etc.?

Answer: Nobody likes to suffer except a masochist. So a non-masochist should not cause suffering to others. So their fault is that they cause suffering to others although they would not like the same treatment for themselves. The general principle is that you should not do unto others what you would not like to be done to yourself. This does not require any belief in God or ātmā. This is common sense, and a good one, because it will help to keep sanity in the society.

Question: If you say that they are humans so they should discriminate between right and wrong and thus must be punished for their severe crime/offenses, then this discriminative knowledge is like the dry theoretical knowledge that we are not the body but the soul.

Answer: So why do you not cross the road when a speeding car is coming? Have you been hit by a speeding car? I sure hope not. You should cross the road even when cars are speeding by until you get hit and learn by your own experience. Human beings learn not only from their own experience but also from others. Is this very difficult to understand? Am I asking for too much if I ask you to learn from others’ experience? Otherwise, what is the difference between a human being and an animal?

Question: I think that one has to first realize the scripture. Even senior devotees know that criticizing Vaiṣṇavas is an offense, still they do it and do not show respect to other Vaiṣṇavas if they are not in their sampradāya.

Answer: Yes, the purpose of our practice is to get realization. I think every practitioner knows this and desires to have an experience.