Home  |  Brāhmaṇa by Birth or Qualification?

Brāhmaṇa by Birth or Qualification?

Question: Upon study of the Gosvāmī literature it is clear that:

1) Brāhminical initiation is only meant for children born in brāhminical families;

2) Bhakti is meant for everyone;

3) Bhakti can give Kṛṣṇa but still not qualify one as brāhmaṇa in this life. Technically, nobody except Indians can take upanayana and recite Brahma Gāyatrī.

Yet, non-Indians are also under sattva, rajas, and tamas. Gītā 18.40 includes everyone in the universe under this classification and then goes on to classify brāhmaṇas, kṣatriyas, vaiśyas and śūdras. (Gītā 18.41 – 43). It appears that the Gītā’s classification is not universally applicable, as mlecchas can become Vaiṣṇavas, but they can never become brāhmaṇas. Is this a limitation of scripture that it excludes anyone without Indian birth who might be sattvic as having the ‘right’ for brāhminical saṁskāras? I am assuming that such a non-Indian child could get all the requisite ritualistic saṁskāras if society so allowed and the parents so desired.

Answer: Yes, the first two points are correct. The third one needs a modification: Anyone born in a brāhminical family, whether Indian or non-Indian, can take upanayana and recite Brahma Gāyatrī because there are brāhmincial families living in Mauritius, the Fiji Islands, etc.

Regarding your next comment, scriptures speak of two types of principles. First, there are the eternal principles, such as the qualities of ātmā, described in the second chapter of Bhagavad Gītā, or the law of karma, explained in the third, fourth and fifth chapters of the Gītā. These principles do not depend on place or time. Then there is a second set of principles, which are primarily related to the application of the first set of principles in contemporary society. What Kṛṣṇa describes in Gītā 18.41- 43 is a universal principle that does not depend on birth in India or anywhere else. The difficulty arises in applying this principle in contemporary society. Unless these two points are understood clearly, there will be confusion about scriptural rules.

The truth at present is that the traditional varṇāśrama system, which flourished in India for thousands of years, has become dysfunctional because the propagation of this system does not depend on a single individual but on the whole society, which is managed by the state government. So, if the state government does not accept it, which is the case at present, it is not possible to apply this system in its complete form. It was the duty of the state government—the kings in the past, who had to enforce the system. You are probably aware of the story of Sudraka from Rāmāyaṇa who was beheaded by Lord Rāma because he was engaged in severe penance, although being a śūdra. Only brāhmaṇas were supposed to perform such kind of austerities, not śūdras, and if a śūdra did it, then there would be a disruption in the society because of not following one’s prescribed duty. At present, this story and many other such stories are the objects of criticism and derision by modern Indologists both Western and Indian, as well as by the Dalit scholars. The reason being that the critics try to impose their understanding of social mechanisms on society based on varṇāśrama system without understanding that these two societies had different goals to achieve. It is just like trying to criticize the etiquette of a particular society by another society that follows contrary principles. For example, in India, eating with the hand is acceptable, but in Western culture, it is a taboo. Or in Indian culture, a male member does not kiss a female friend or relative when they meet, but in the West, it is a norm.

From a practical point of view, if there is a non-Indian child who has brāhminical qualities, who would test that the child actually has brāhminical qualities? I don’t see any system at present for any such test to designate a child as a brāhmaṇa. Moreover, who will perform upanayana for such a child and what would be the purpose of such a ceremony? Why would such a child want to undergo this process? If the purpose is only to study the Vedas, then there is no need of upanayana saṁskāras because at present you can study the Vedas without any such saṁskāras. If the purpose is spiritual, then how does upanayana saṁskāras help? Is it to follow the smarta process, which is part of varṇāśrama? If yes, then the above-mentioned questions will arise and if no, then what is the purpose? 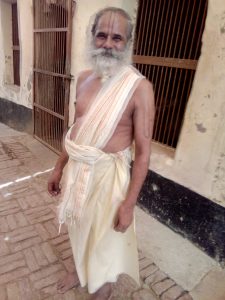 If, however, the purpose is to become a brāhmaṇa and perform brāhminical services, then it has to be thought over seriously. There are two opinions about it. There are some who say that anyone who has the qualification regardless of birth can be a brāhmaṇa. Indeed, this is how it was originally. There are, however, others who are very orthodox and do not accept this principle and go only by birth. Therefore, if someone really has the need, then one can find some qualified people belonging to the first category and undergo the ceremony. There is no point in debating over it because neither one of these two parties will change their opinion.

Now to go a little step further on this topic of a child taking birth in a non-Hindu family and desiring to take upanayana saṁskāra: It may be understood that the reality exists at three levels, adhibhautika (physical), adhidaivika (psychic), and adhyātmika (spiritual). When a child is born in a traditional Indian brāhmaṇa family and has brāhminical qualities, not only is he a brāhmaṇa at the adhibhautika level, he is also a brāhmaṇa at the adhidaivika level. However, a child born to Western parents may have brāhminical qualities and be a brāhmaṇa at the adhidaivika level but not at the adhibhautika level. To be born as a brāhmaṇa at the adhibhautika level, one must be born in a lineage coming from one of the sages mentioned in scriptures, such as Vasiṣṭha, Garga, Bharadvāja. etc. While doing a saṅkalpa in any varṇāśrama ceremony, such as sandhyā vandanam (a compulsory daily ceremony for a dvija), the dvija has to recite his name, gotra, ṛṣi, pravara, and śākhā. Without mentioning these, the ceremony cannot be completed. The child born to a non-Hindu family would not have the last four items. So, it has to be considered who would supply these items. (Note: Dvija, or twiceborn, includes brāhmaṇa, kṣatriya, and vaiśya.)

Answer: Adhidaivika can relate to the psyche as well as to the devas, who are the controller or the invigorators/potentiators of the psyche.