May 23, 2015Questions & AnswersComments Off on God’s Love, Samadhi, Meditation on Intimate Pastimes

Question: What is the relationship between yogic yamadhi (sampragyata/asampragyata ) and premsamadhi for bhakti-yoga? If we can claim that premsamadhi is highest state achieved by a jiva, it would be in contradiction to the  Patanjali Yogasutra.

Answer: Bhakti-yoga samadhi is beyong sampragyata and asampragyata of Patanjali. Patanjali samadhis are within the realm of sattva guna. Bhakti samadhi happens by the internal potency. See SB 1.7.4 – bhaktiyogen manasi….

Although they may appear similar, there is a sea of difference between bhakti-samadhi and yoga samadhi. Patanjali samadhi by itself, without the contact of bhakti, cannot take you beyond the gunas of prakriti. At most you can reach a high level of sattva.

That is why Patanjali also recommends isvara-pranidhana.

Question: There is a verse in 10th Canto SB 10.33.40 which says that one becomes free from sex by hearing the intimate pastimes of Radha Krsna. Many traditional practitioners of raganuga bhakti advise to meditate of these pastimes even if one is not free from sex desire, whereas other Vaishnava groups say that first one has to be free from sex desire altogether before doing this kind of smaranam. What is recommended?

Answer: First of all, a distinction has to be made between sravanam, kirtanam and lila smaranam. The popular verse spoken by Sukadeva Gosvami at the end of the rasa-lila, in which he describes the benefit of hearing Krsna’s dealings with the gopis does not talk about lila smaranam. It very clearly says that one who hears (anusuyanam) or describes these pastimes. There are two adjectives given for such a person who hears or recites this: The first is one who hears with faith. “sraddhanvita” That means that the person must have staunch faith in the meaning of scriptures, which is called sastriya sraddha. Such sraddha of course does not come without study of shastra from a genuine teacher. The second adjective which is stated in the verse is “dhira”, which means a person of stable mind, not somebody who is frivolous and confused.

While commenting on this verse, Sri Visvanath Cakravarti Thakur writes that the word dhira means a learned or wise person (pandita), by which he means one who is not foolish and has no faith. Therefore, the word sraddhanvita is used along with it. That implies that one who lacks sraddha in shastra and carries offenses against the name cannot attain prema. So basically what he is indicting is that the two adjectives dhira and sraddhanvita speak of a person who has sastriya sraddha and is offenseless.

Unless one is free from sex desire, one will not gain much from these stories, but will lose a lot. On the other hand, if these stories are explained properly, then one will transcend sex desire. This is the greatness of these books. 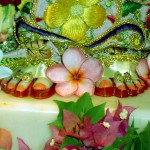