Bhagavān Is Not Biased (Part 2)

Śrī Jīva now responds to the second objection regarding the accusation that Bhagavān is biased. Earlier he established that Bhagavān acts only to give delight to His devotees, which seemingly implicates Him in bias. 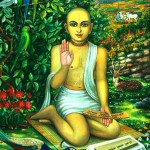 Śrī Jīva writes that a person acts to please others for two reasons only—either to satisfy his or her own selfish interest or just to bestow welfare without any motive. In the first case, there is no question of partiality to others, since one’s interest is only in one’s own benefit. When a person acts solely with a motive for personal gain, he can be called selfish but not biased toward others. Since Jīva Gosvāmī’s whole point here is to disprove the charge that Bhagavān is biased, the first case shows itself to be irrelevant to the objection, since there is nothing to disprove. Where selfishness alone is the motive for one’s actions, partiality is necessarily an impossibility, since the intent is not truly to benefit anyone else. Moreover, selfishness cannot be the case with Bhagavān who is completely self-satisfied. He has nothing to gain, being ātmārāma and āpta-kāma.

This leads us to consideration of the second possibility, that in acting for the welfare of others, Bhagavān does demonstrate partiality toward His devotees. Śrī Jīva begins his reply to this possibility by first examining the psychology of compassion. He explains that compassion is a transformation of the heart or the mental quantum (citta), which arises when the heart directly contacts the misery of another. Only when impelled by such compassion is a person moved to act for another’s welfare. This means that one feels empathy in relation to others’ misery. The feeling of empathy impels one to remove the misery of the person with whom one empathizes.

In the case of Bhagavān, however, such empathy is not possible because He is completely transcendental to all material experience. Feelings of pain and pleasure are modifications of the citta, which is an evolute of prakṛti. Bhagavān is beyond any tinge of māyā, as established earlier. Therefore, He cannot be touched by any material misery and so cannot feel the pain of others in His heart and be aroused to compassion. As such, there is no possibility of His being biased.

To this argument, one may reply that Bhagavān is omniscient and therefore must know the pains and pleasures of others. This is undeniably true, but Śrī Jīva emphasizes that in fact He does not feel them in His heart. He knows such suffering through the experience of others, not directly. This also means that He is not impelled by compassion, because to be compassionate the pain of another has to touch one’s own heart.

If one then argues that Bhagavān must not be omniscient because of His absence of awareness of misery, Śrī Jīva says that this too is denied by the example of the sun. The fact that Bhagavān has no direct experience of the material suffering of the people of the world in no way impedes His all-knowingness, just as the absence of darkness in the sun does not contradict the all-pervasiveness of its radiance. On the contrary, His absence of awareness of misery should be taken as a positive attribute.

We can accept that Bhagavān can have some general knowledge of misery, but not the direct experience of it. If Bhagavān were able to experience material misery, then out of compassion He would have delivered everyone from the material world at the mere sight of their suffering. But this has not happened, which proves that He is immune to the experience of material misery. Śrī Jīva says that it is specifically for this reason that Bhagavān cannot be called cruel for not alleviating the suffering of humanity.

One may question that if Bhagavān is unable to feel the pain of the living beings, then how is it that He is able to feel the pleasure of His devotees? If He acts to give them pleasure, then He must feel it also. If not, how would He know that devotees are deriving pleasure from His actions? The process of experiencing pain and pleasure is the same. If pain is material, so must be pleasure. 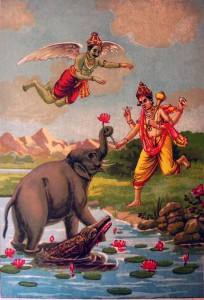 An objection is raised to this assertion. There is the story of Gajendra, the elephant king, whose leg was seized by a crocodile while he drank water from a lake. He struggled for a long time to release himself, but was unsuccessful. Finally, he prayed to Bhagavān for help, and the Lord appeared immediately on the spot and severed the head of the crocodile with His cakra. The elephant was suffering from pain, and Bhagavān, being compassionate, released him. This means that Bhagavān was able to empathize with the pain of Gajendra.

Śrī Jīva replies that it is a fact that Gajendra was in material pain. But Bhagavān did not rescue him out of empathy for his pain, but rather because of his surrender in the form, “You are my only shelter.” Such surrender is nothing but bhakti, and thus, it is bhakti alone that impelled Bhagavān to rescue him.

Another example of bhakti impelling a bhakta to act in an apparently mundane way is found in the Tenth Canto in the story of the twin arjuna trees. In that narration, the sage Nārada cursed the sons of Kubera, who were enjoying water sports with young damsels while completely intoxicated and naked. Nārada cursed them to become trees. But it was a blessing in disguise, as he himself said:

Attaining the proximity of Kṛṣṇa after one hundred celestial years, you will return to your own heavenly abode and will have acquired devotion. (SB 10.10.22)

The two brothers’ attainment of devotion is clear from the prayers they recited to Kṛṣṇa after He uprooted their tree bodies, allowing them to regain their original forms as the sons of Kubera. So, Nārada’s curse was in fact a blessing: “To bless them both, Śrī Nārada pronounced a curse upon them, saying …” (tayor anugrahārthāya śāpaṁ dāsyann idaṁ jagau, SB 10.10.7).

Thus, the conclusion is that the compassion of Bhagavān or His devotee manifests as a result of their bhakti and not because of the material suffering of the person so blessed. If their compassion were to manifest at the mere sight of the material suffering of all the conditioned souls, then everybody would have been blessed by Bhagavān and no one would remain suffering in the universe.

It is possible that Bhagavān can come to know of a person’s pain indirectly through His devotees. Devotees in this world have experienced material misery, and thus it is possible for them to empathize with the suffering of others. If a devotee is moved to bless such a person and prays to Bhagavān to be compassionate on him, then Bhagavān may bestow His blessings on that person. Thus, Śrī Jīva concludes that Bhagavān acts either to please His devotee or in direct response to bhakti, and not in relation to the work of creating, sustaining, or destroying the cosmos. 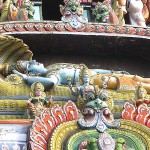 Bhagavān is free from the defect of partiality because He is immune to material pleasure and pain. In spite of this, however, He holds His devotees as especially dear, and He loves and serves them exactly as they love and serve Him. In this respect, His nature is said to be exactly like that of a wish-fulfilling tree (kalpa-taru svabhāva), or in other words, a tree from the heavenly realm (sura-druma) [see verses SB 8.23.8 and 10.38.22, respectively]. It is the nature of a wish-fulfilling tree to respond in perfect uniformity with the aspiration of the supplicant. It responds differently not out of bias, but only because the requests of the aspirants are different. That is its impartiality. To impose the same reward on everyone irrespective of their desire would be biased.

So, the fact that Bhagavān loves and serves His devotees is simply because they are the only ones interested in such a relation with Him. For Bhagavān not to respond in this manner to His devotees would violate the unbiased nature of a wish-fulfilling tree. Furthermore, to remain neutral in regard to all others is simply the appropriate response to their own neutrality in regard to Him. It is what they choose, and so He graciously responds accordingly. From this perspective too, Bhagavān is to be understood as unbiased.

Alternatively, Jīva Gosvāmī argues, even if we inevitably admit that Bhagavān is partial, because it is the nature of everyone without exception, it should not be considered a contradiction in Him because of His transrational opulence. His transrational power can accomplish acts that defy reason, and thus He remains free of any blemish, which in this case is simply our inability to comprehend His actions.

Before Kṛṣṇa appeared on earth, He ordered the devas to appear in the Yadu dynasty (SB 10.1.22). Later on, when He took birth, they assisted Him in His pastimes. If He required the help of the devas, who are material beings, then it may seem like a lack of independence or self-sufficiency on His part. In Kṛṣṇa Sandarbha (Anuccheda 43), it will be explained that these devas were partially empowered by Bhagavān’s potency, and thus He was never in fact dependent upon them.

Thus, the conclusion is that Bhagavān is complete in Himself. He acts only for the delight of His devotees, while the sustenance of the cosmos is but a concomitant effect of those pastimes with His devotees.