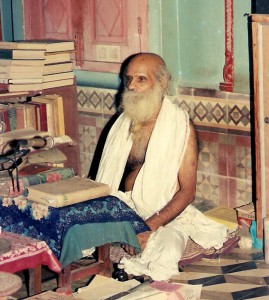 My intention was to study all the major Gaudiya Vaisnava literature from Maharaja while studying the Sad-darshanas, such as Nyaya and Vaisesika, from another teacher. My logic was that no one else could teach Gaudiya literature, while others were proficient in the Sad-darshanas, so I should not use Maharajji’s time to study the latter. Maharajji knew this, but one day said that he also wanted to teach me the Sad-darshanas. I was happy to hear that. He started teaching me Sloka-vartika of Kumarila Bhatta and Nyaya-siddhanata-muktavali of Visvanatha Panchanana. The first is a book of Purva-mimamasa and the second of Nyaya. Both are very difficult subjects. Maharajji was a great Naiyayika. Although he had degrees in all darshanas he preferred the title Nyayacarya for himself. Usually no one can teach these books without first preparing for the class, unless one is regularly teaching them. Maharajji, however, had no time to prepare. He told me that in his student life he worked very hard and studied under the best teachers in Banaras,therefore, he could teach them without preparation – even after such a long gap. 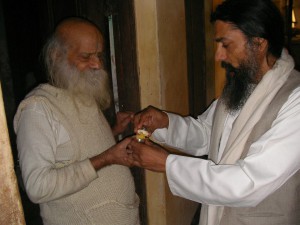 I learned a lot by observing him. He would do most of the temple services himself, such as sweeping in front of the temple, picking flowers and tulasi leaves for worship, and preparing bhoga for the deities. He did not take help from anyone in deity worship, he  served the cows himself – even grinding wheat for feeding them – and he personally cooked  and served all the ashram inmates.  He himself would only eat one meal a day, at 5 pm;  before then he would not even drink a drop of water.

He was a perfect example of a devotee. He was not just giving sermons, sitting on a high throne. He did not do anything just for show or to impress others. He was always in the mood of service. Whatever he did, he did it with full absorption, without any thought of anything else. When he was teaching, he was only absorbed in that, never deviating from the subject. 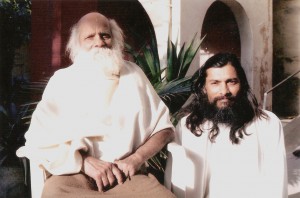 At first my class would start at 5pm and go until 9 pm without any break. There were rarely any visitors, and if there were any, they had to wait until the class was over. In the summertime, it was terribly hot and the electricity would fail for hours. Maharaja would light up a gas lantern for light, which would make the room even hotter, but he never felt any discomfort while teaching. We would sweat profusely, but the whole class was like samadhi. Nothing could disturb us. His presence was awe-inspiring. I felt insignificant in his presence, but was very attentive to all his words and movements – whether in class or the goshala.

A Class of His Own 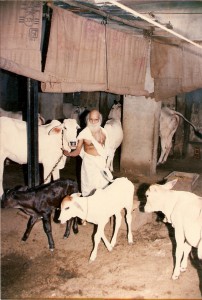 While in the goshala, he hardly spoke. Being with him was very intense, like a deep meditation. When he wanted me to do something, he would express it through his hand gestures or by his looks and I had to guess what he wanted. If sometimes I was not able to understand, he would become very upset. The reason was, as I understood, that for him goseva was not some ordinary activity. It was service to the cows, the beloved of Lord Krishna. He did not consider them animals, but ista-devatas, or worshipable deities. Therefore, he was unable to tolerate even the slightest discrepancy or delay in the service. This was perplexing in the beginning because I was unable to understand his mood. For example, before he came to the goshala, we would clean everything, change the water, and serve the chaff (bhusa) for the cows. Then he would come and personally mix flour in the bhusa. If he saw even one particle of bhusa floating in the water, he would look at me, which meant I should again change the whole water. At first I did not understand this, but then I realized that it is like putting an offering plate in front of the deity – and how can we offer a glass of water to Krishna which has a bhusa particle floating in it? I have neither heard nor seen such a mood of service to cows anywhere. 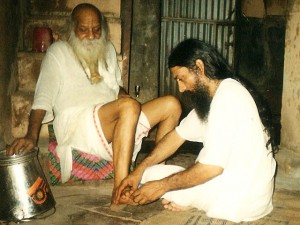 One of his favorite statements was “Seva to seva hai. Seva kam nahi hai” (Service is service. Service is not work). There is a difference between seva and work. In work the concentration is more on the outcome, one feels relieved and happy when it is over, and there is a sense of satisfaction when it is completed. In seva there is happiness from the very outset. There is no urgency to finish it, it is natural and without anxiety, and one is fully absorbed in it. This is what I observed in Maharajji: he was never in a hurry and there was no anxiety to finish the service.

It is said that in the spiritual world, time is flexible: it facilitates the Lord’s pastimes. Therefore, the Lord is never in a hurry. I could feel this mood in Maharajji. If I finished something quickly he would remark, “Punjab Mail”, a reference to a train that was supposed to be fast in the olden days.

During the later days when the goshala increased in size he engaged in goseva until early morning 2am or sometimes even 3am.  He was beyond time. Through observing him I could understand the traditional Indian mind. 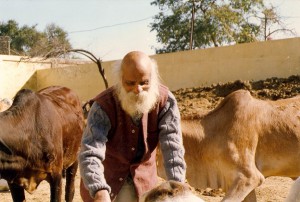 I felt that Maharjji had two different moods. When he was teaching he seemed a different person, one completely absorbed in scriptures. I could ask him any question and he would give a very elaborate answer. While engaged in goseva, however, he was very grave and reticent. He did not like any interruptions from anyone. He was very alert and intolerant of any discrepancy in the service. I have met many sadhus in my life, but I have not seen anyone with such a service mood.

I feel that Maharajji was a class of his own: He belonged to the old school. He was probably the last person with the mood of Gosvamis of Vrindavan, learned in all shastras, highly renounced, and in a service mood with no concern for his body. I wonder if such a person will walk again on earth in this Kaliyuga.

His exalted character is my good fortune and the good fortune of all others who came in contact with him. Without seeing a living master it is impossible to understand uttama bhakti – no matter how much we read and hear about it. This is my experience and firm conviction. 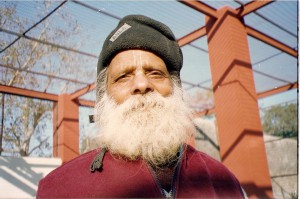 Now that Maharajji has left us, it all appears like a dream. It is hard to accept that he is no longer physically present at Kalidaha. For so many years I went there day after day and always found him. While living in Vrindavan my movements were just from my room to Kalidaha and back. I hardly did any parikramas of Vrindavan, Govardhana, or visited any places in Vraja. I did not think that he would leave so suddenly, I was somehow quite certain that he would be a centenarian. But who can say anything about the Lord and His devotees? I live remembering his words and his personal life which I got to see so closely, and I wonder how Lord Krishna arranged for me to move from Detroit to Maharajji. It can only be yadrcchaya.